Medical DITI, or Digital Infrared Thermal Imaging, backed by over 40 years of success, is a simple 15-minute non-invasive test that allows us to visualize and quantify changes in your skin surface temperature that can indicate early stage breast disease.

There are many major features and benefits of DITI including:

~ Early detection earlier than mammograms, doctor examination or self examination
~ Accurate demonstrates heat patterns that are strongly indicative of breast abnormality and can detect subtle changes in breast temperature that indicate a variety of breast diseases and abnormalities
~ 100% safe with no radiation reduces your lifetime exposure and decreases your risk for developing breast cancer
~ Painless no compression which eliminates trauma to the breast and possible spread of any pathology that may exist
~ No body contact required for even greater comfort that supports a life-long commitment to routine breast screening
~ Non-invasive an infrared scanning device is used to convert infrared radiation emitted from the skin surface into electrical impulses that are visualized in color on a monitor
~ F.D.A. approved

~ State of the art technology
~ Convenient locations near everyone
~ Expert care and attention by a sensitive, caring, friendly professional

DITI is a non-invasive, completely painless test. There is no contact with your body of any kind and no radiation.

We make the procedure as easy, quick and comfortable for you as possible. It is stress-free and only takes a short while to complete.

There are only a few simple steps. 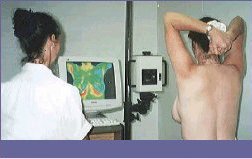 At your appointment, you will be asked to disrobe and dress in a paper cape. During an adequate period of acclimation, you will fill out questionnaires so we have your personal contact info and current breast health status. They will then be reviewed by your technician for the purpose of clarification. Your scanning session will begin shortly thereafter. While sitting on a stool, five images will be taken with an infrared camera as you move through five different positions. Upon completion of your session, you will have the opportunity to view your images with the technician. The images along with your breast health information will then be sent to our physicians for review and reporting.

At this first session, your unique thermal signature is recorded. In order to establish stability, the patterns and temperatures of a subsequent session is performed in three-month’s time. This becomes your stable baseline assuring that the patterns have remained unchanged. It is then used to compare with future imaging to detect changes during your routine annual examinations.

All thermograms (breast images) and reports are kept on record.

See FAQs for pre-exam instructions and for more information on DITI.

DITI’s role in breast cancer and other breast disorders

DITI provides early detection and monitoring of abnormal physiology and the establishment of risk factors for the
development or existence of cancer.

This patient was 37 years old when her first baseline thermogram showed a slight hyperthermic asymmetry in the upper right breast. The follow-up study showed the pattern had become more-well defined and although clinical correlation did not find anything remarkable, it was decided to repeat the exam again in three months, when again significant changes were seen.

Mammography was performed at this stage with the thermographic guidance of the locally suspicious area at 1 o’clock to the right nipple. The mammographic findings were inconclusive and the patient was referred for a repeat mammogram in 12 months. Thermographic monitoring was continued and at the fifth comparative study at 12 months, significant changes were still evident and the hyperthermic asymmetry (temperature differentials) had increased.

Immediate further investigation was strongly recommended despite a scheduled mammogram in six months, and at the patient’s insistence, a repeat mammogram was performed which clearly showed a small calcification (1 mm) at 1 o’clock. Within one week a lumpectomy had been performed with good margins and the pathology was confirmed as a malignant carcinoma (DCIS). This patient has now had stable thermograms for the last two years and is expected to remain healthy

This 37 year-old patient presented for routine thermographic breast screening and was not in a high-risk category with no family history.
Breast exams had not been previously performed. The vascular asymmetry in the upper left breast and the local hypothermia at 11 o’clock was particularly suspicious and subsequent clinical investigation indicated a palpable mass at the position indicated.
A biopsy was performed and a DCIS of 2 cm was diagnosed.

The results of this routine study led to the diagnosis of inflammatory carcinoma in the right breast. There were no clinical indications at this stage.
(Thermography can show significant indicators several months before
any of the clinical signs of inflammatory breast disease, skin discoloration, swelling and pain).
Inflammatory breast disease cannot be detected by mammography and is most commonly seen in younger women, the prognosis is always poor. Early detection provides the best hope of survival. 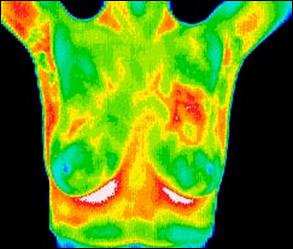 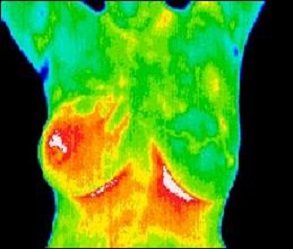 What is inflammatory breast cancer?

Inflammatory breast cancer is a rare but aggressive type of breast cancer that develops rapidly, making the affected breast red, swollen and tender. It is a locally advanced cancer, meaning it has spread from its point of origin to nearby tissue and possibly to nearby lymph nodes.

The early signs of more common forms of breast cancer a breast lump or suspicious area on a routine, screening mammogram are often absent in inflammatory breast cancer. Instead, the breast may appear normal until tumor cells invade and block lymphatic vessels in the overlying skin. Fluid backs up, and the breast swells and becomes discolored.

Inflammatory breast cancer can easily be confused with a breast infection, but if it is cancer, symptoms will not go away with antibiotics. Seek medical attention promptly if you notice skin changes on your breast, to help distinguish a breast infection from other breast disorders.

Between 1 percent and 6 percent of all breast cancer cases in the U.S. are attributed to inflammatory breast cancer. Survival rates are lower than those observed in other locally advanced breast cancers. But new treatment approaches offer greater odds for survival than ever before.

Despite its name, inflammatory breast cancer does not cause inflammation the way an infection does.
Signs and symptoms include:

~ Rapid change in the appearance of one breast, over the course of days or weeks
~ Thickness, heaviness or visible enlargement of one breast
~ Discoloration, giving the breast a red, purple, pink or bruised appearance
~ Unusual warmth of the affected breast
~ Dimpling or ridges on the skin of the affected breast, similar to an orange peel
~ Itching
~ Tenderness, pain or aching
~ Enlarged lymph nodes under the arm, above the collarbone or below the collarbone
~ Flattening or turning inward of the nipple
~ Swollen or crusted skin on the nipple
~ Change in color of the skin around the nipple (areola)

Who benefits from DITI?

All women can benefit from DITI! However, it is especially appropriate for younger women (30-50) whose dense breast tissue makes it more difficult for mammography to be effective. Also for women of all ages who, for many reasons, are unable to undergo routine mammography. This test can provide a “clinical marker” to the doctor that a specific area of the breast needs particularly close examination.